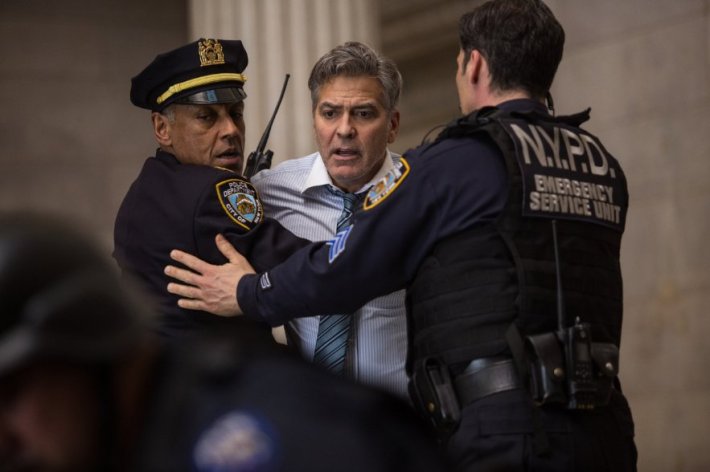 I was looking forward to Jodie Foster’s Money Monster going into this film. The summer movie season is always packed with action and science fiction films, so I always welcome counter-programming like this. The film features a strong core cast of George Clooney, Julia Roberts, and Jack O’Connell. Everybody involved both in-front of and behind the camera is talented, and they bring their best for this 90+ minute thriller. However, an overly cliche and mediocre screenplay bog this film down, and make Money Monster a forgettable and a by-the-numbers thriller with predictable twists. Here’s the review.

Clooney plays Lee Gates, a television host (who may or may not have been inspired by Jim Kramer) of a show called “Money Monster”. The show is watched by millions, and the flamboyant Gates gives daily stock advice on stocks from all sorts of companies. After the fictional company IBIS has a bad day (Gates predicted the opposite that day), an angry investor (Jack O’Connell) holds Gates and the studio hostage in an attempt to figure out why his money, along with millions and millions of other investor’s money, mysteriously disappeared. The rest of the film is Gates, his director (Julia Roberts) and the angry investor to figure out where the money went so this situation can end.

This is Foster’s first film since 2011’s The Beaver, and this is a welcome return for her. While the screenplay is cliche and uninspired, her direction helps elevate the material. And thanks to Foster’s extensive background in acting, all of the performances are terrific. Clooney is great and charming as always, Roberts gives one of her better performances lately in the film, and we also get a small supporting performance from Gincarlo Esposito as the New York Police Commissioner. But the standout in the film is Jack O’Connell, who’s quickly becoming one of our generation’s most fascinating actors. The British actors nails his New York accent, and you legitimately feel for the character who lost everything due to Gates’ bad tip and a company that isn’t telling the entire story. I enjoyed the back-and-forth between Clooney and O’Connell in the film, which was probably the strongest aspect of the film.

I also really enjoyed how close-quartered the first half of the film was. We do see what’s going on in the outside world during the hostage situation, but most of the first half is just Clooney, his crew, O’Connell, and Roberts in the booth watching this all unfold. Like I said before, there were some genuinely tense moments, and having this portion of the film set mostly in the studio was fascinating and intriguing. However, once we get out of the studio, the film starts to fall apart. It becomes a run-of-the-mill thriller with twists you could’ve seen coming a mile away, If the film had a tighter/smarter screenplay by more competent screenwriters, this could be a breakout hit of the summer. Instead, the film’s strong-points can’t save the entire piece from mediocrity.

But the film isn’t all that bad. It’s not great, or really that good, but it was entertaining from beginning to end and I was never bored with the film. If you really wanna check Money Monster out, it wouldn’t kill you to wait a few months ’till it hits Redbox or on Demand. It’s a bit of a shame since May apparently is a cursed month for Clooney. His colossal failure Tomorrowland was released last May. This isn’t as awful as that movie was, but you get where I’m coming from. Luckily, we have Shane Black’s The Nice Guys next weekend and Jay Roach’s LBJ biopic All The Way premiering on HBO next Saturday, so definitely look out for the reviews of those two potentially fantastic movies.