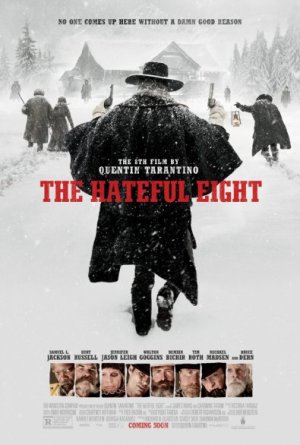 Finally got to this one before 2016. The saga of Quentin Tarantino’s The Hateful Eight has been a peculiar one at best. The film was announced two years ago and the first draft of the screenplay was leaked. Tarantino considered scraping the film altogether after this incident but after a successful script reading with a few of the actors that appear in this film, Tarantino mounted his follow-up to 2012’s Django Unchained just in time for a limited, 70 mm release on Christmas Day and a wide release on December 30th. I wasn’t able to catch the film in 70 mm, but I did the next best thing and saw it at my local Alamo Drafthouse. Here’s my review of The Hateful Eight.

It’s the wild west, post-Civil War. The film follows a bounty hunter (Kurt Russell) and his bounty (Jennifer Jason Leigh), a woman whose supposed to be hanged in a town in Wyoming. As they get to the town in the middle of a massive snow blizzard, they pick up a drifter (Samuel L. Jackson) and a man who claims to be the new sheriff of this town (Walton Goggins) as they rest for the night at a mysterious cabin. In this cabin, they find a Brit (Tim Roth), a retired Confederate general (Bruce Dern), a cowboy (Michael Madsen) and a Mexican (Demian Bichir). Together, they have to spend the next few nights together, and we uncover a little bit of who these characters are, and what their motives are.

I think what I liked about The Hateful Eight is that the meat of the film is a contained and actor-centric piece that plays out like a stage play. The first 40 minutes of the film are Russell, Jason Leigh and Jackson going to the cabin, and that’s when the film really starts to get going for me. We see all of these characters play off of each other, and see a clashing of ideals and cultures. It’s already tense in the house, but gets more tense when Jackson’s character, who like Bichir are the only minorities in the house, and see the racism clout the tiny and dingy cabin. It’s pretty fascinating to watch the film on that level, and Tarantino’s always stellar dialogue helps make this 3-hour Western never feel like it’s a drag.

Tarantino’s direction is also worth noting, as the directors trademarks are all on display here (the chapters, larger than life characters, the dialogue, excessive violence, etc), but it feels like Tarantino is holding back a little bit here with this film. The film isn’t really all that violent until the second half of the film, which I won’t go into (obviously). Similar to what I described with how Ridley Scott works in my review of The Martian (review here), Tarantino is a great director of actors, and he is able to get some of the best performances of these actors’ careers in this film. Everybody from Russell to Dern is fantastic, but the real standouts of the film are Jackson, Goggins and Jason Leigh. There’s been talk of Jennifer Jason Leigh getting some possible awards attention for her role in the film, which is an idea I wouldn’t be totally against. It’s some of the finest work of her career, and its great that Tarantino gave her this role instead of Jennifer Lawrence (who was originally up for the role). Lawrence is a great actress, but she wouldn’t have fit that character or this film.

The film also features some gorgeous cinematography from longtime Tarantino collaborator Robert Richardson, who not only shoots the film on film, but on Ultra Panavision 70, a format that was regularly used to film westerns in the 50s and 60s on and hasn’t been used in 50 years. As I mentioned before, I didn’t see the film in the 70 mm Roadshow format, but I think you’ll be satisfied with watching the film in a regular old theater as the cinematography stunning to look at in any capacity. The way Tarantino and Richardson show off the Wyoming wilderness during this snowstorm works especially well since you begin to feel a little bit cold yourself as you watch this film. It’s some of the finest work of Richardson’s career, which says a lot since he’s behind some of Martin Scorsese’s, Tarantino and Oliver Stone’s best pieces of work.

Since The Hateful Eight is expanding nationwide and is probably playing at your local cinema right now, I highly recommend you go check it out if you’re a fan of Tarantino and his movies. It’s once again a showcase for Tarantino’s love of older cinema, and how he incorporates that love into all of his films. While the film snob in me would love to see Tarantino move back to the mean streets of Los Angeles, a la Reservoir Dogs, Pulp Fiction, and Jackie Brown, for his next film, The Hateful Eight will most definitely do if you’re a fan of his work. So, with that said, this is my final movie review of 2015. Tomorrow, on January 1st, 2016, my best of 2015 list will be up for your viewing pleasure. I hope I don’t piss you off too much with some of my picks.

One thought on “The Hateful Eight: MOVIE REVIEW”