The month of June will be wrapped up after today. It’s been 6 months, and I’ve been a few places in the past 6 months. In that time I went to Sundance, SXSW, and I’m not done yet. And in that time, I’ve seen some pretty solid films, even for the first couple months of the year. So, I’ve decided that since I’ve seen some pretty great films in the past few months, I felt I should come up with ten films that have stood out from these first 6 months. But before we do that, I have some honorable mentions

Kat Candler’s Hellion is one of the best representations of South Texas that I’ve seen on screen in quite some time. There are some truly powerful performances by Aaron Paul and newcomer Josh Wiggins in the film, all set against this backdrop of parenting struggles, alcoholism, and a feeling of being alone. It’s not the most uplifting film on the planet, but it’s a bit of a gem, and it’s currently playing on Demand right now.

Another film that I saw at SXSW, The Raid 2 was able to build on the last Raid film by having an actual story with fleshed out characters and a very intriguing, Departed-esque plot. The action was even crazier and more exciting than the last, and its one of the most bad ass films I’ve seen all year. The film is either currently out on DVD or is about to come out, I’m too lazy to go check. But, whenever its out, please go rent the film.

I saw No No at Sundance and at SXSW, and it’s one of the best sports documentaries I’ve ever seen, period. Director Jeff Radice tells us the story of Dock Ellis, a former pitcher for the Pittsburgh Pirates who threw a no-hitter while under the influence of LSD. But what this documentary does differently is that it doesn’t directly show that one story of that day, but rather the entire story of Ellis’ life, from his drug addiction to Ellis overcoming it. It’s a very powerful and exciting documentary, with a terrific soundtrack by Adam Horowitz, AKA Ad-Rock from the Beastie Boys. The film should be headed on Demand in the near future, so check it out then.

A lot of people weren’t that satisfied with the adaptation of the popular musical about Frankie Valli and the Four Seasons. But what I really loved about Jersey Boys is that its not a musical, or a standard musical. Instead its a really excellent and well done biopic on the duo by legendary filmmaker Clint Eastwood the spans from the 50’s all the way to the 1990’s. It’s a film that a lot of people will dismiss, which is a shame because it’s a really excellent film. The film is currently showing in theaters, so I highly recommend you go check it out.

The follow-up to the surprisingly brilliant and funny 21 Jump Street film adaptation is just as funny and brilliant, with the jokes supplying some of the funniest riffs and commentary on Hollywood today. Channing Tatum and Jonah Hill are as bromantic as they were in the last film, if not more this time around, and we also get some great supporting work out of Ice Cube and newcomer Wyatt Russell. It’s probably the funniest film I’ve seen all year, so I highly recommend you go check it out. The film is currently playing in theaters.

Easily one of the best superhero films to come out, well ever, Bryan Singer has surpassed all of the previous X-Men films in making this fun and exciting time travel epic that spans from the 1970’s all the way to the not so distant future. Hugh Jackman returns to glorious sucess as Logan/Wolverine, but easily the best dynamic of the film as it was in the last X-Men film, is the work between James McAvoy and Michael Fassbender as the younger Professor X and Magneto. The acting is great, the writing is surprisingly good and funny, and the film is just a great thrill ride from beginning to end. I don’t know if the film is still in theaters, but if it is, please go check it out if you can. 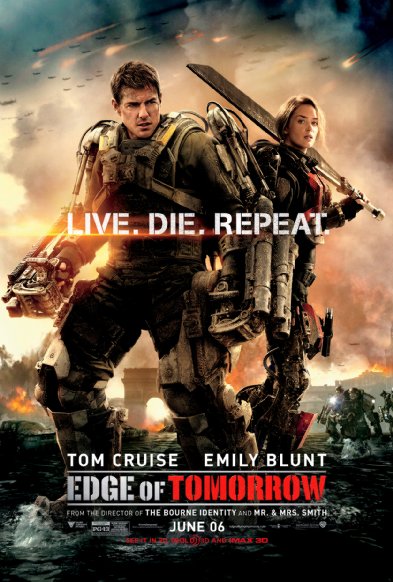 A film that surprised a lot of folks, including myself, this is probably my favorite blockbuster of 2014, although unfortunately it has not been performing well at the box office. And it’s a shame, because the film, directed by Doug Liman, is a terrifically fun and exciting action flick with some terrific performances by Tom Cruise and Emily Blunt in their respected roles. The film has a blast with playing with this repeating timeline effect, and like I said, it’s one of the best times I’ve had at the movies this summer. The film is currently still playing in theaters. 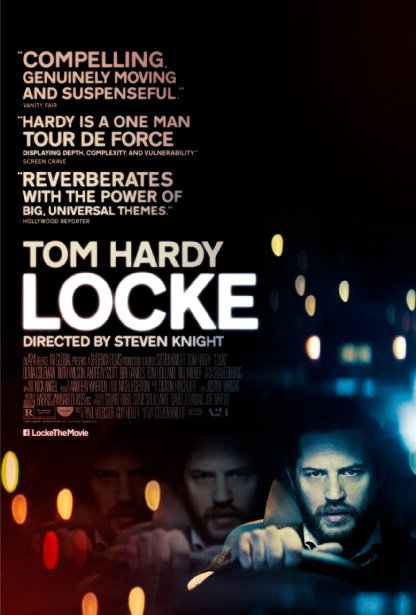 Locke is a very unique film that is currently playing at the local art house theaters here in Austin. The entire film is Tom Hardy having to drive to London for the evening, and during this drive, he conducts business through his telephone, for both professionally and personally. It’s a very unique film that was written and directed by Steven Knight. The film is definitely not for everybody, as the entire film does take place inside Hardy’s vehicle. But, for me, the film was a breeze, as the running time is barely 90 minutes, and it didn’t hurt that it’s arguably Tom Hardy’s best role to date. The film is currently showing in a number of theaters around town.

I originally said that I enjoyed Locke more than Chef, but the more and more that I thought about it, I was wrong. Chef is just a helluva good time at the movies, and the terrific soundtrack that Jon Faverau has comprised for his film has been the soundtrack of my summer so far. It’s arguably the best film Faverau has directed in a long time, with some great performances by Faverau, John Leguizamo, Sophia Vergara, and a terrific debut performance by Emjay Anthony as Faverau’s son in the film. It’s one of the best road trip films I’ve ever seen, and luckily the film has been slowly rolling out in theaters all across town, so I highly recommend you go check out Chef. 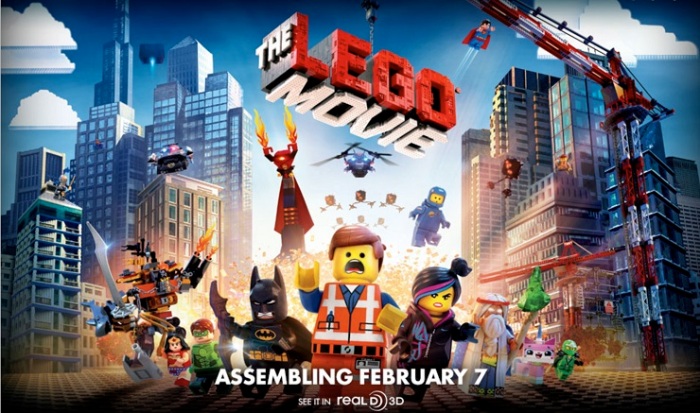 Easily the best animated film I’ve seen since Toy Story 3, Phil Lord and Chris Miller once again made a film based on an existing franchise that felt like their own, and never took away from the charm of the existing property. They did it with 21 and 22 Jump Street, and now they have conquered animation. The film features a terrific voice cast that consists of Chris Pratt, Elizabeth Banks, Morgan Freeman, and Will Ferrell, and not to mention some of the most beautiful and unique three-dimensional animation I’ve seen in an animated film. The film is currently out on Blu-Ray and DVD, so please go rent it.

Wes Anderson’s latest feature film is a charming and offbeat film that a lot of people didn’t find so offbeat, as it was Anderson’s first film to make 100 million dollars worldwide. That’s awesome, because this is one of Anderson’s finest films to date. I saw the film during the SXSW film Festival, and I instantly fell in love with it, along with the award worthy performance by Ralph Fiennes as the head of this ficticious hotel, along with a cast of several of Anderson’s regulars, like Edward Norton, Jeff Goldblum, Bill Murray, and many more. The film is currently aviable on Blu-Ray and DVD.

Richard Linklater’s Boyhood was the first film I saw in 2014 at the Sundance Film Festival, and ever since I saw the film, I haven’t been able to get it out of my head. Richard Linklater’s tiny 12-year epic payed off in a massive way, as he tells the story of young Mason, from age 6 all the way to age 18. It’s a film that’s beautiful, sad, poetic, funny, and everything inbetween. I don’t know about the other folks that saw the film, but it felt very personal for both Mr. Linklater and myself. Mr. Linklater finished off his Before trilogy with Before Midnight to glorious effects, and somehow, he topped himself once again with this masterpiece. I call a lot of films masterpieces on this website, but this is one of those rare masterpieces, one that I feel could stand the test of time for years and years to come. It also doesn’t hurt that it’s Richard Linklater’s best film, well, maybe ever. The film will be released in limited release on July 11th, and slowly expand to theaters nationwide.

So those are the best films of 2014. What are your favorites? Please sound off in the comments, but no funny business please.